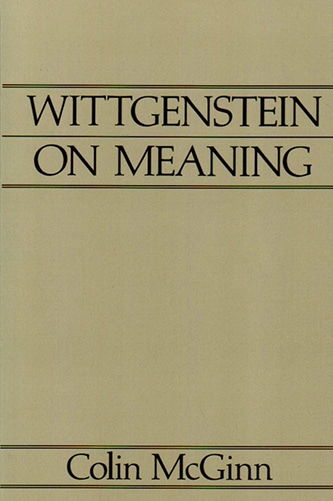 Wittgenstein on Meaning, ASM Volume 1: An Interpretation and Evaluation

This work is a criticism of Saul Kripke’s work Wittgenstein on Rules and Private Language. McGinn offers firstly an exegesis of Wittgenstein’s position, emphasising that his concerns were predominantly negative rather than positive. The second section of the work deals with Kripke’s work. McGinn (p. 68) firstly points out that Wittgenstein, after stating the sceptical paradox, immediately makes it clear that his position is that the paradox arises from a misunderstanding; that is, he does not endorse the conclusion drawn. McGinn then discusses whether Wittgenstein is to be taken as generally sceptical about meaning-related facts (pp. 70-71), concluding that Wittgenstein should be read as proposing a straight solution whereby understanding consists in the fact of having an ability to use signs. McGinn concludes the chapter (pp. 82-92) by criticising Kripke’s community conception of rule-following for failing to recognise: Wittgenstein’s epistemological naturalism; his emphasis on the blindness or lack of reasons for rule-following; and his emphasis on the equivalence of meaning and use (a distinction that Kripke must exploit for the sceptical paradox to be formulated). McGinn continues in the third chapter to critically analyse Wittgenstein’s views. McGinn agrees with Wittgenstein’s criticism of inner interpretative states determining meaning, but argues that the role of mental states should not therefore be ruled out entirely, noting (p. 117 n. 33) that “we should preserve the idea that understanding per se is a causal source of use […] Also, we do not want to pull apart the causal and normative bases of use: what causes use should also be what makes it correct”. Overall though, McGinn clearly outlines what he takes to be Wittgenstein’s positive position, that meaning “rests ultimately on the bedrock of our natural propensities” (p. 138), and, notwithstanding minor quibbles that are non-essential to its formulation, concurs with it. Finally, McGinn critically analyses Kripke’s sceptical solution, offering a variety of objections to both community conceptions of meaning and language modelled on assertability rather than truth conditions.

While my own incliniation is towards a sceptically grounded naturalistic solution to the sceptical paradox, and I find McGinn’s attempts to sketch a dispositional account to be highly flawed (refer to the huge amount of secondary literature for the arguments), the real value of the work is the extremely lucid and well-argued exposition of Wittgenstein’s main concerns in the Philosophical Investigations, together with the critique of the Kripke interpretation.