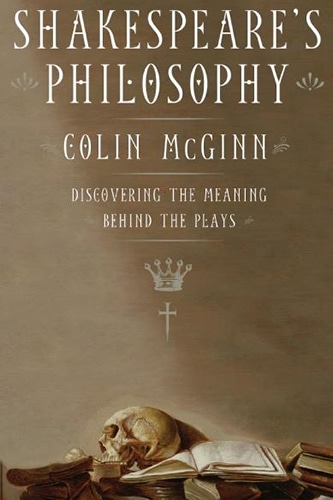 Shakespeare’s plays are usually studied by literary scholars and historians and the books about him from those perspectives are legion. It is most unusual for a trained philosopher to give us his insight, as Colin McGinn does here, into six of Shakespeare’s greatest plays – A Midsummer Night’s Dream, Hamlet, Othello, Macbeth, King Lear, and The Tempest.

In his brilliant commentary, McGinn explores Shakespeare’s philosophy of life and illustrates how he was influenced, for example, by the essays of Montaigne that were translated into English while Shakespeare was writing. In addition to chapters on the great plays, there are also essays on Shakespeare and gender and his plays from the aspects of psychology, ethics, and tragedy.

As McGinn says about Shakespeare, “There is not a sentimental bone in his body. He has the curiosity of a scientist, the judgement of a philosopher, and the soul of a poet.” McGinn relates the ideas in the plays to the later philosophers such as David Hume and the modern commentaries of critics such as Harold Bloom. The book is an exhilarating reading experience, especially at a time when a new audience has opened up for the greatest writer in English.

“Colin McGinn has written a clear, spare book that illuminates Shakespeare’s role as a thinker in his time—and for all time.”

The Power of Movies
Scroll to top