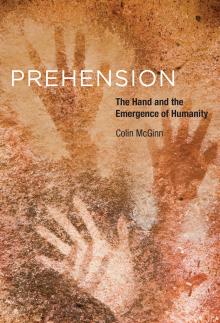 This book is a hymn to the hand. In Prehension, Colin McGinn links questions from science to philosophical concerns to consider something that we take for granted: the importance of the hand in everything we do. Drawing on evolutionary biology, anatomy, archaeology, linguistics, psychology, and philosophy, among other disciplines, McGinn examines the role of the hand in shaping human evolution. He finds that the development of our capacity to grasp, to grip, to take hold (also known as prehension) is crucial in the emergence of Homo sapiens.

The human species possesses language, rational thought, culture, and a specific affective capacity; but there was a time when our ancestors had none of these. How did we become what we so distinctively are, given our early origins? McGinn, following Darwin and others, calls the hand the source of our biological success. When our remote ancestors descended from trees, they adopted a bipedal gait that left the hands free for other work; they began to make tools, which led to social cooperation and increased brain capacity. But McGinn goes further than others in arguing for the importance of the hand; he speculates that the hand played a major role in the development of language, and presents a theory of primitive reference as an outgrowth of prehension.

McGinn sings the praises of the hand, and evolution, in a philosophical key. He mixes biology, anthropology, analytical philosophy, existential philosophy, sheer speculation, and utter amazement to celebrate humans’ achievement of humanity.

“Life in the twenty-first century leaves little doubt that the human brain is headed for a role reassignment, the nature of which will ultimately depend on what computers cannot do to solve human problems and to manage our complex affairs. In this context, philosopher Colin McGinn’s new book Prehension is a critical reminder that human intelligence is irreplaceably human, rooted in ancestral and evolutionary circumstances that gave the hand its distinctive and powerful individual, social, and cultural agency.”

—Frank R. WilsonAuthor of The Hand: How Its Use Shapes the Brain, Language, and Human Culture

“In the beginning was the hand. So argues Colin McGinn in this gripping, inventive, and wide-ranging tale of evolution and human nature. How did we ever get to be what we are: smart, social, linguistic, dexterous, and prone to anxiety? It is not our brains but our hands that explain our contours. Drawing on his life in philosophy, and his engagement with cognitive science and the theory of evolution, McGinn proposes that we are handlers by nature: we take hold, reach and grasp, seize, stroke, poke, squeeze, probe, and rub. We are great big hands extended toward the world around us.”

—Alva NoëProfessor of Philosophy, University of California, Berkeley, and author of Strange Tools: Art and Human Nature
Buy on Amazon

The Character of Mind